Skills learned in the military often transfer to the rural workforce.
In 2003, Army combat engineer Mike Tangen found himself in the Kuwait desert training for Operation Enduring Freedom. When the “go” signal came in the form of 36 overhead artillery shots, the troops and Apache helicopters headed out in long convoys across the Iraq border.

“The convoy moved so slowly,” Tangen recalls. “I felt like we were hundreds of miles from the border and just crawling. There were some nerve-wracking parts, especially when we went through a narrow pass where there was supposed to be an ambush.”

While there was a firefight, they made it to the border relatively untouched. They punched through sand berms surrounding the country and advanced on Baghdad.

Tangen’s job in the U.S. Army focused on designing battlefields. His skills didn’t seem likely to transfer to a career back home in central Minnesota. After returning to the States in 2003, he purchased a small herd of cattle and later went to work for an area farmer, spending much of his time as a long-haul trucker. With a young family, though, he was ready to have more time at home.

Lanceta is on a dual mission: to help military veterans find meaningful employment and to build understanding of the value of hiring veterans.

“Military personnel bring special skill sets to the workplace. Loyalty, dedication, duty and respect are ingrained in our soldiers,” says Lanceta. Each year, about 234,000 soldiers end their service with the U.S. Army, Air Force, Army Coast Guard, Marine Corps and Navy. In the next 10 years, more than 1 million soldiers will transition from the Army.

One focus of Soldier for Life is ensuring that soldiers leaving the Army have a job waiting.

“It can be a challenge to translate military experience into civilian terms. That can make it hard to find a job, even when the skill set might be a perfect match. We’re helping soldiers outline skills in nonmilitary terms,” says Lanceta, who recommends Hero to Hired (H2H.jobs), for transitioning military personnel. It offers career exploration tools, military-to-civilian skills translation, and education and training resources.

"We’re also working with companies to help them understand what individuals with military experience bring to the workplace,” adds Lanceta. CHS is one of those companies.

“We look at the ability of individuals with military backgrounds to solve problems and work in stressful situations. We look at how those military values align with CHS values and we see a good fit for CHS and the cooperative system,” says Cate Sprout, talent acquisition manager.

“By focusing on helping military personnel translate the characteristics and the skills gained in the military into civilian language, we can help our soldiers and companies understand how military roles translate to the workforce,” Lanceta says.

Valuable Experience
Ken Paulson has always been fascinated by how things work. Growing up, he worked alongside his dad, who owned a body and mechanics shop. He applied that interest in a six-year tour in the Navy as part of the nuclear power program.

“I had two years of schooling before going out to the ship. It was rigorous right from the start,” says Paulson. Of 84 people in his basic training company, 42 were designated for the nuclear power program. From those 42, only Paulson and three others completed the program.

He describes his responsibilities on the nuclear-powered aircraft carrier as a combination plant operator, chemist and radiological controls technician.

Paulson was deployed to the Persian Gulf for six months, providing support to ensure safe travel of seagoing vessels and conducting training exercises with other U.S. military branches and allied forces.

After six years in the Navy, he used the GI Bill to earn a degree in chemical engineering from Montana State University. Today he’s a process engineer at the CHS Laurel, Mont., refinery, where he works on control systems and automation, ensuring electronics work correctly.

“The military is process-oriented. What you do affects 6,000 people in the middle of the ocean. That gives you the mindset and framework to build a process and complete a task,” Paulson says.

He adds that hiring veterans brings real-world, real-work experience to the workplace.

SEE MORE: View a video with Mike Tangen by clicking the following image: 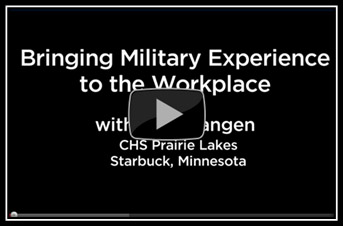 Ag Warriors is a program that assists military men and women in the search of careers within the agriculture and food industries. The Ag Warriors program opens the door for both employers and veterans to connect regarding real-time employment and career opportunities within the agribusiness and food industries via AgCareers.com. Learn more about the AgCareers.com Ag Warriors program and companies supporting the program.