Lure Of The West

For the first time in Canada’s 145-year-history, the population West of Ontario is larger than the nation’s Eastern provinces. Although it’s easy to attribute this population shift to the booming oil sands in Northern Alberta and Saskatchewan, we can’t forget the impact agriculture is having on job creation and where Canadians are deciding to call home.

The national population hit 33.5 million this year, and although Ontario is still Canada’s largest province, 2011 census data shows that 30.7% of the population is now residing in the West as opposed to 30.6% in the East.

In the past, the promise of high paying jobs linked to Canada’s oil patch lured Easterners and new Canadians to the Prairies and beyond, but are the oil and gas industries the only things drawing Canadians West? We don’t think so.

The Canadian Agribusiness Job Outlook Report (found under the Market Research section on AgCareers.com) reported that in 2011 more than 3,300 Canadian jobs in agriculture were posted on AgCareers.com. More than 1,500 of those positions were posted in Manitoba and Saskatchewan, resulting in a 54% increase in 2011. Alberta and British Columbia also saw a significant jump in job posting activity, notching a 54% increase in 2011 as well, proving that jobs in agriculture are booming, too. 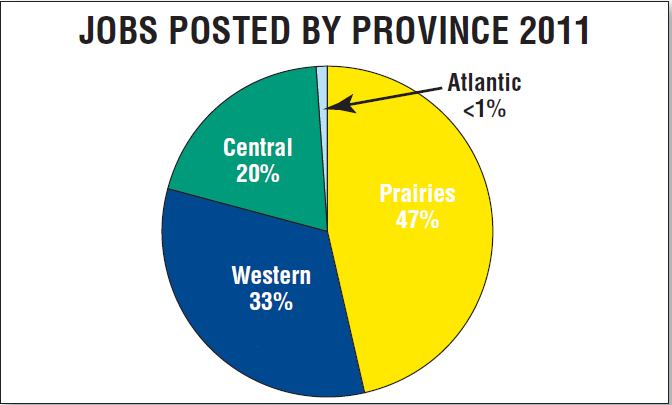 Steve Gotto, Recruitment Coordinator with Federated Co-operatives Limited has been working in Human Resources for the past four years and is an alumnus of the University of Saskatchewan, where he obtained his bachelor of commerce degree with a major in management/general business. Gotto helped shed some light on how jobs in agriculture fit into the population shift puzzle, and suggests that roles within the agricultural industry over the past five to ten years are being broken down from broad, macro and hybrid roles to more specialized positions.

“I think in the past individuals were well versed in many areas of the industry, where as now, coming up through agricultural college or university programs in Western Canada, we see students focusing on a particular facet of agriculture and with those specialties, comes the creation of new, diverse, speciality roles.”

Gotto believes that more Westerners from both urban and rural settings are choosing to pursue post-secondary degrees or diplomas in agriculture as well. He notes that the industry has made a point to market agriculture, and the role it plays in providing ingredients to feed the world, across the West and trusts that the heightened exposure has helped to fill the talent pipeline.

Sales and marketing roles within the agronomy sector have traditionally been the most common jobs found on AgCareers.com in the West. However, census Canada reports that a growing ag-biotech sector in Saskatchewan is complimenting the province’s traditional strength in agriculture.

Jobs like “Laboratory Technician,” “Research and Development Tech,” and “Greenhouse Technician,” with companies like Bayer CropScience and Novozymes BioAg are cropping up more often on the job board providing more evidence that the ag-biotech sector will continue to stimulate job growth in Canada’s West.

Other career paths to consider are within the equipment sector, such as “Technicians,” “Agricultural Equipment Sales Representatives,” and “Precision Farming Specialists,” with companies like Rocky Mountain Dealerships and Cervus Equipment Corporation, and are always in high demand.

It’s an exciting time to be entering the workforce in agriculture. Jobs are plentiful and diverse across the country and the industry is expanding and shifting in new ways to accommodate graduates from a variety of different disciplines.

Think about the option to specialize in a specific niche of the industry as there are many more focused roles within the industry today. As always, check out AgCareers.com to view the latest jobs in our industry.